Posted on September 21, 2009 by stefan klopp under Travel

The Palio di Siena is a horse race that is run twice a year in the Italian city of Siena. I attended the race with Jason this year. Before the trip (really before even getting to Siena) my knowledge of the race was really limited. All I knew was that a bunch of horses raced around the outside of the Piazza in Siena and that the spectators stood in middle. After getting to Siena I realized there was so much more to the event.

We arrived in Siena by bus from Florence in the early afternoon of the Saturday before the race (the race is run on the Sunday). From there we took a city bus out to where we were staying. Our friend Berenice who lives in Siena runs one of nicest bed and breakfast/villas in Siena. She was kind enough to let us stay with her during for the weekend. On our bus ride out to the farm we got into conversation with a girl from Brazil, who as luck would have it, was staying at Berenice’s place as well. So we all went together to the Villa. 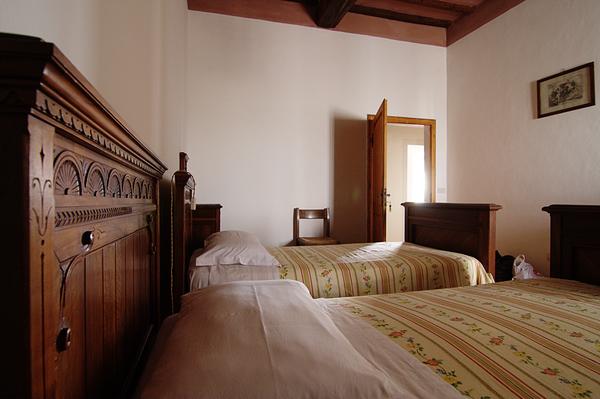 We arrived to the Villa to find Berenice waiting patiently for us. I was literally blown away when I saw the complex. The Villa Cavaglioni is absolutely stunning. It is essentially a mansion made out of a 14th century fortress situated on the top of a hill overlooking the beautiful Tuscan farms below. I really felt like royalty being able to stay in such a lovely accommodation. 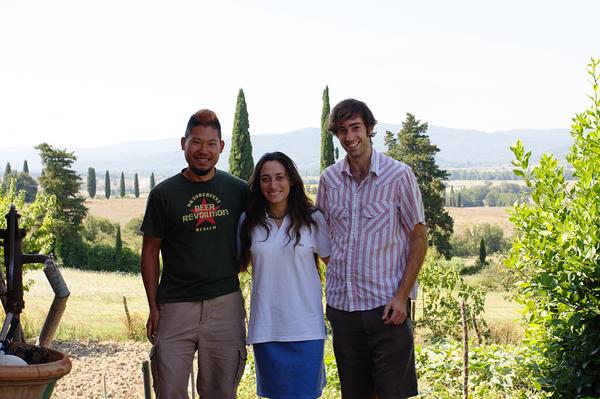 After we had cleaned up we met Berenice for lunch. At which time she gave us the full run down on the event. The first thing she told us was this was not a tourist festival. Not to say there wasn’t going to be lots of tourists there, but the event was put on for the people of Siena, and was an event for the people of Siena. The race dates back to the 16th century, so it is an event that is deeply rooted in the culture of Siena. Berenice went over the history of the event, what it meant to people of Siena, the schedule for the following two days, and finally how we should act during the Palio. It was really great to have a local guide to give us so much information on the event, as it really gave a new perspective on things.

So that afternoon we went back to Siena where we caught the rehearsal of the race. There was a lot of people in the Piazza just for the rehearsal, and you could really feel the excitement from the locals. There was singing and chanting and dancing. Enemy contradas would sing songs back and forth to each other. 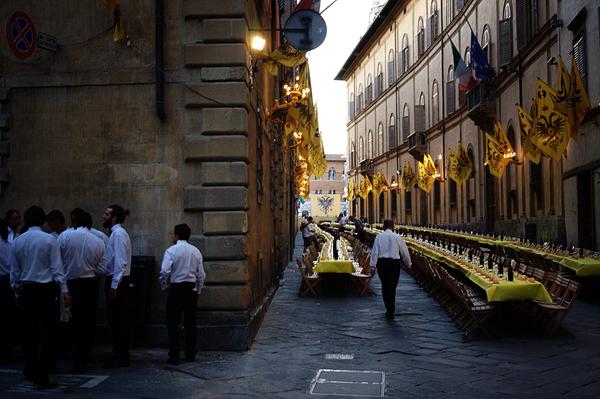 After the rehearsal (in which 3 riders fell off their horses), Berenice left us as she was to attend her contradas great dinner. Every contrada has a big dinner for all their members the night before the race. The members get to eat and drink with each other, see their jockey and horse, and discuss their chances for the next days race. During this time we found a lovely restaurant where Jason and myself finally found ourselves a Florentine Steak. After finding some gelato we called it a night as we knew the next day would be a very full day. 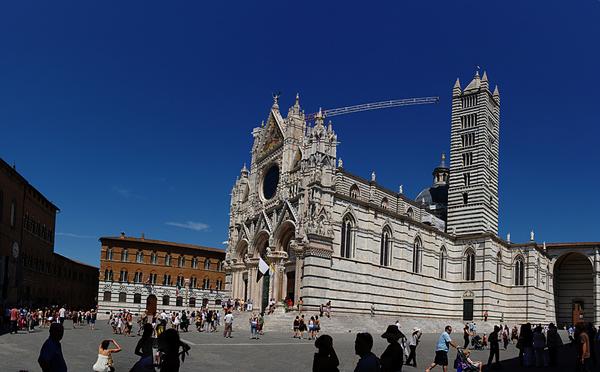 The morning of the race we head into the city and did a bit of sightseeing. We started by exploring the ancient streets of Siena and in doing so getting ourselves a little lost. Whichever part of the city you were in you would see flags flying from the contrada of that specific section of the city. 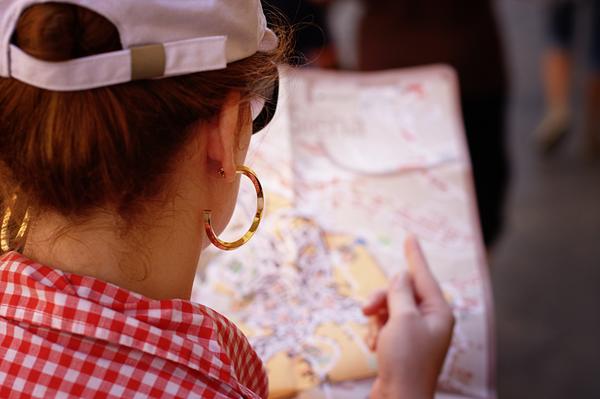 Eventually we found our way to the Cathedral of Siena. Inside the cathedral we found more flags from all the contradas. It was interesting to see these flags in the cathedral where you would normally expect to see only Christian parchments. 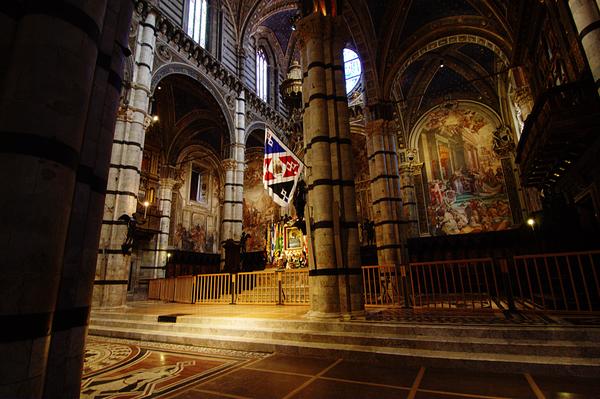 We then decided to get a little lunch before all the excitement started. So we found a pizza place we noticed the night before as having a really long lineup, and decided to try it out. The pizza was cheap and good, a combination I generally like. After our lunch we headed back into the Eagle contradas territory to catch the parade. Berenice said this was the best place to see the parade as this was the last section of the city that the parade route took before entering the Piazza. It was also the closest place to be to get into the Piazza after the parade. 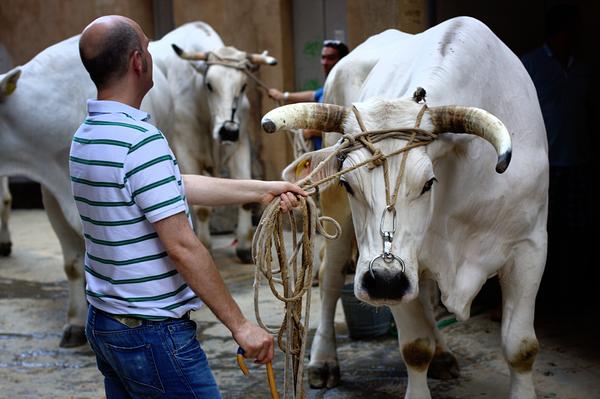 We watched the parade literally from the doorsteps of the Eagle contrada house. So every contrada that would pass the house would pay their respects in some form or other to the contrada. It was really incredible the level of detail that was put into the costumes and outfits everyone was wearing. 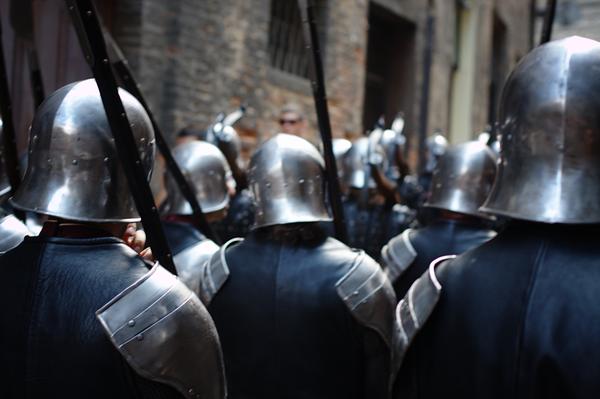 I think my favourite part of the parade however was the flag tossers. They would march down these narrow streets swinging their flags around, nearly taking the heads off of people watching the parade. If that wasn’t enough they would then proceed to toss their flags up to their partners and catch them right before they plunged into the crowds. It was amazing the level of dexterity these men showed. I made a short video of some flag tossers as they passed by us.

After the parade had finished we hurried into the Piazza to get a good spot. We wanted to be in an area where we could see the track alright, but also be close enough to the exit so that right after the race we could run to catch our bus. In typical Jason fashion we had booked a flight out early the next morning from Pisa. For us to be able to make that flight we had to make it back to Florence that night. The last bus of the day left Siena at 8:45pm. With the race set to start at 7pm we thought we would have enough time. However after talking to Berenice we didn’t feel to confident. She told us that while the race was suppose to start at 7pm, it most likely wouldn’t. Regardless we thought we would risk it, and finally found ourselves a decent spot in the Piazza among the 50,000 other spectators. 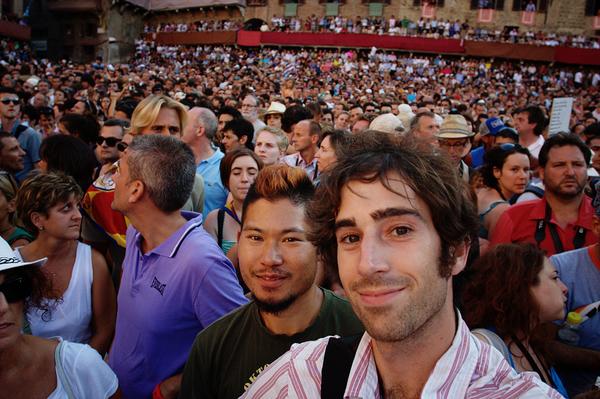 As it turns out Berenice was right on the money. While the horses entered the track roughly around 7pm, the race didn’t start. The horses would line up together then fall back then line up again. Apparently during this time the members of contradas are making secret pacts against other contradas, bribes are made, and overall the jockeys are just trying to control their horses. What was most incredible about this part of the event was that everyone was dead silent. a good 75,000+ people all completely silent waiting to hear the announcer tell the order of the horses. You could really feel the anticipation building.

Eventually the race started. Or so we thought. Seconds after the horses bolted, there was a big bang, and all the horses slowed to a trot and made their way back to the starting line. That was the first false start. So again the horses lined up. The began jockeying for position, and again the waiting game started. There was several times during this setting up of the horses along the line where two jockeys got into physical fights, whipping each other and each others horses, and yelling out profanities. 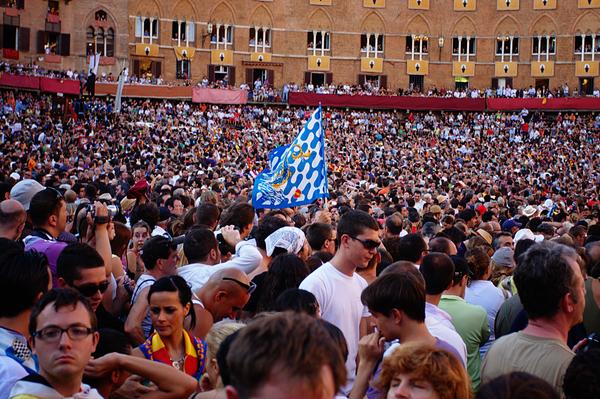 The crowd was still in good spirits, but slowly getting a bit restless. The horses and riders however just continued to line up, then fall back again. At this point I was beginning to get a bit worried. It was already past 8pm, and while the race only lasts roughly 3 mins, at the rate this buildup was happening, I started to have doubts we would make our bus. Then the horses took off again… but yet again it was another false start.

At this point people really started to get restless, and started to yell and chant more at the riders. Also at this point I was on the verge of giving up on us catching the bus out of town. However just as I was losing all hope the race started, and it was clean. The waiting was finally over, and the race was on. Then it was done. That quick. 2 minutes and it was over. We had waited in the Piazza a good 3+ hours for a 2 minute horse race. It was exciting. Actually it was very exciting. 2 riders during one of the hairpin turns were flung from their horses. The ultimate winner of the race was the Civetta contrada (owl). The Owl had now won the Palio in since 1979 so this was a very huge victory for them. Their members were all in tears of joy. On the other side of the spectrum was the Onda contrada (wave) who were the enemies of the Owl. Members of Onda went running out of the piazza as fast as possible after the race. When people would get in their way they were at times mildly violent in getting through the crowd to get back home.

At this point in time it was probably 8:30pm. We had 15 minutes to get from the crowded piazza to the bus station. Easy right? Well when you have no map and are surrounded by 50,000 other people trying to get out of the piazza it becomes more difficult. Me and Jason bolted almost as quickly as the Onda members, and made our way out of the Piazza relatively quick. We then doubled back and forth through the streets of Siena trying to find our way back to the bus station, but also via a quick not too traffic route. However in doing so we got ourselves lost again, and actually ended up at the church of the Owl contada. The church has significance as it is the place where they bring the victory painting to after the race to celebrate. We had actually beaten most of the contrada members to their own church. However this was bad news for us as we had to backtrack against a torrent of people rushing up the church.

So we doubled back and ran through the crowd. Nothing like running against the grain. It was fun in a way as we got to see the excitement and joy in all the peoples faces as they marched up the church. We even got to see the people carrying the victory painting.

Finally we found our way back onto the right path and headed up towards the bus station. By this point it was well past 8:45pm. There was a train that left at 9;15pm but the station was a taxi ride away, and there wasn’t a taxi in site. So we ran to the bus station in hope they held the bus until after the race.

We arrived to find a full bus waiting for any last passengers. Literally 1 minute after we boarded the bus, it departed. What a rush. I think the run after the race was more exciting and got my adrenalin pumping even more than the actual race did. We HAD to catch that bus, and I can’t believe we actually did. So that is the end of the story. We made it to Florence, and then later in the night to Pisa. It was an incredible day, with lots of excitement and an experience I won’t soon forget.

Here are a few additional photos from Siena. Also if you are looking for another good review of the Palio in August checkout: http://taryninitalia.blogspot.com/2009/08/il-palio-di-siena.html. 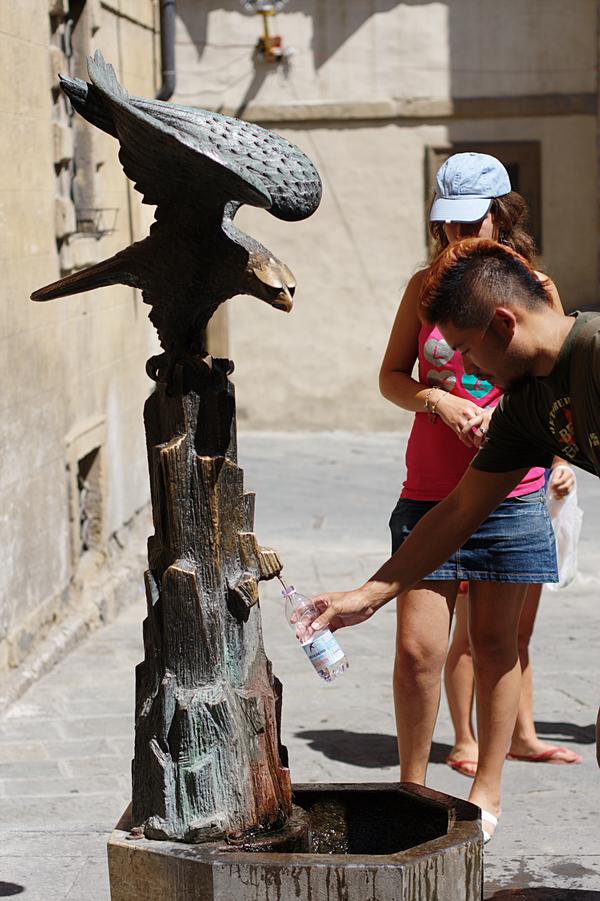 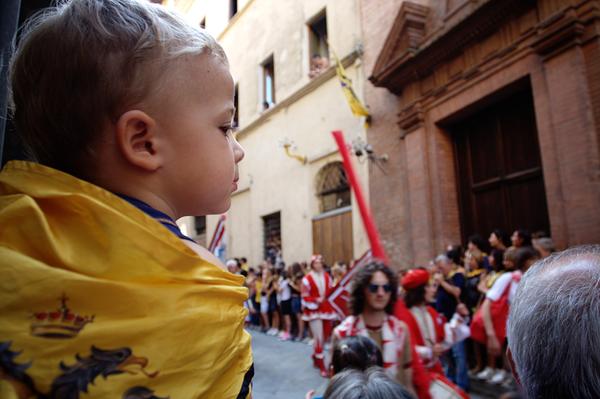 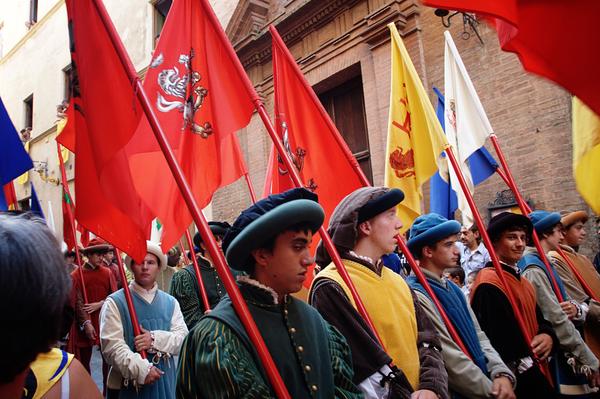