Posted on April 09, 2011 by stefan klopp under Daily Musings

“That hockey is a dangerous sport…” is the response I keep on hearing when I tell people how I broke my leg. One look at the National Hockey League injury reports and you might just agree. Concussions, broken ankles, separated shoulders, blown knees. Even our beer league team has had a number of players injured this year.

This is the second injury I have ever had playing hockey. The first injury I got when I was young, maybe 11 or 12 years old. I was playing shinny with a few friends in the winter on the outdoor Fauquier hockey rink. I tried to slide down to block a play and ended up sliding into a friends skates. He fell backwards onto me, with his elbow landing on my mouth. This probably wouldn’t have caused too much of an injury for me if I hadn’t had braces. Unfortunately his elbow dislodged two of my braces and pushed them up into my gums. I remember being in the hospital and having the doctor straighten the braces with what looked like needle nose pliers. I kept thinking to myself, “Dad could have done that and saved us a drive up to Nakusp”. 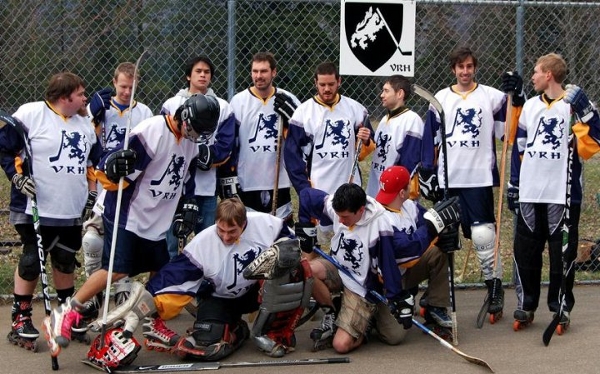 I have played hockey for most of my life. Mostly recreational with friends, however over the past 5 years competitively (as in beer league competitive) in and around Vancouver. I have seen friends and teammates go down with numerous injuries. From separated shoulders, to pucks in the face. You do what you can to keep safe, but sometimes it is just bad luck.

I like to play a pretty aggressive game. Go hard in on the forecheck, and win the battles against the boards. Once the puck is free try and make some offence. This is how the story of how I broke my leg begins. 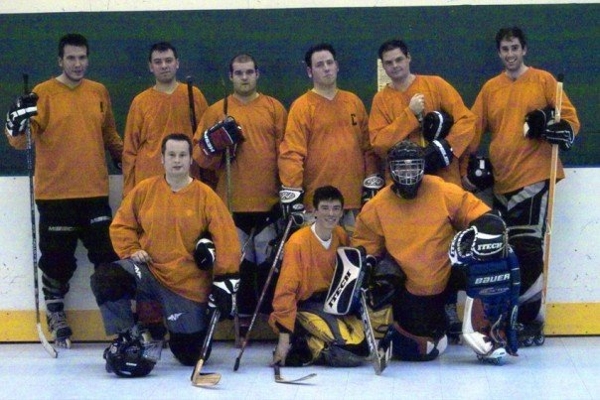 Our hockey team (The Master Bladers) were into the second round of the playoffs. We were one of the hottest teams leading up to the post season, and swept our first round opponent with 2 very commanding wins. We were playing some excellent hockey and feeling pretty good about ourselves before the first game of the next round.

Unfortunately the second round proved to be a lot more tough than the first. Our opponent got up to an early 1-0 lead. Then after a quick goal by each teams we found ourselves down 2-1. Despite the close score, we were being outplayed pretty badly. Mid way through the first half I jump out for another shift. I wanted to bring some energy and get playing my aggressive game. I brought my forecheck and started challenging for a puck along the boards against one of the opponents players. I had the player pinned up against the boards and was trying to work the puck loose. I could sense the opponent was starting to lose balance, so I tried to get a handle on the puck and get out of the boards. Then he fell.

I am not sure if our legs were tangled, or if he fell directly into me, but the first thing that I remember was hearing a crack. I wasn’t sure if it was a stick, or bone, or something else. I looked down to where I heard the noise, and began to scream. My foot was pointing almost 180 degrees in the wrong direction. Heel where my toes should be, toes where my heel should be.

By this point I was crumpled on the ground. My screams were now due to the pain. Teammates rushing off the bench to help out. At this point I realized I needed to calm down. I could feel myself freaking out, bordering on shock, and needed to settle down to help prevent any further damage. Like a monk reciting their mantras, I kept tell myself, “Be calm, breath deep, be calm breath deep.”

With the help of some teammates I was able to roll over onto my side, in doing so my leg flopped over as well. Then I waited for the paramedics, while my friends did what they could to make me comfortable. A few long minutes later and the ambulance had arrived, and I was off to the hospital. 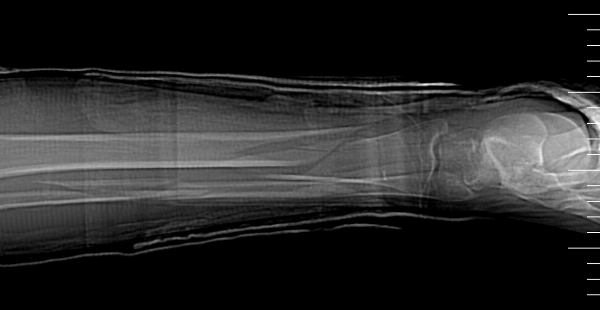 After x-rays it was determined I needed surgery. I had broken both my tibia and fibula in a spiral fracture. There was some major separation and work needed to be done. They put my foot in a cast, and sent me home to await my surgery date. Over the next few days I worked my way into a hospital in Vancouver, and was able to get surgery a day afterwards with one of the leading orthopaedic surgeons in Vancouver.

The surgery was a success, not that I can remember it. I had a metal rod implanted into my leg that starts just below my knee andl ends just above my ankle. Each end of the rod is secured to my bone with two screws.

Now here I lie a week later on my couch anxiously waiting for the swelling to go down in my leg, and to eventually get back on my feet.

Will I play hockey again? I hope so. My injury was freak and accidental. I could have just as easily broken my leg by tripping on a step or getting hit by a car crossing the street. It is unfortunately I broke my leg, and the recovery process is slow and painful, but I won’t use that as an excuse to be fearful and not play a sport I love and am passionate about. So is hockey a dangerous sport as everyone keeps telling me? Perhaps it is, but I don’t think it will stop me from playing. If you think that during the entire time I have been playing hockey, I have only had 2 notable injuries, I would say I am doing pretty good. 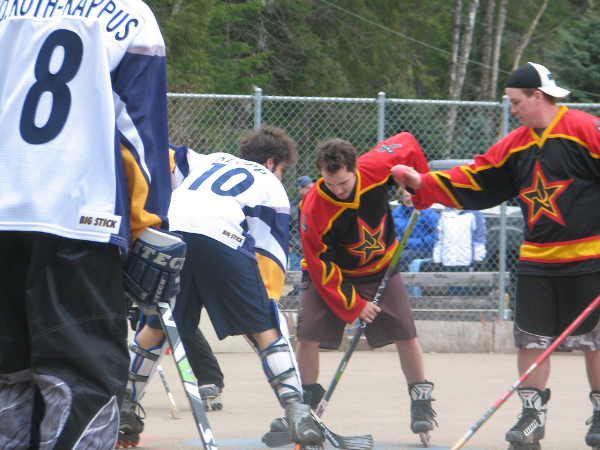 Also just wanted to say thanks to all my friends and teammates who helped me out the night I got injured and throughout the last week and a half. Also to all those wishing me well it has been appreciated! Lastly I have to give a big shout out to all the nurses at St Paul’s hospital. They were simply amazing. Actually all the staff there were really fantastic, nurses especially.

Glad to see you’re in such good spirits considering everything. And with the implant you are now officially bionic, so you’ve got that going for you. Stay away from metal detectors, though! 😉

I figured I could either be down and upset about this, or just accept it and be glad it wasn’t something worse. A broken leg will heal.

We’ve been on pins and needles down here trying to discern exactly what had happened. We’re glad to finally get the scoop and to hear that your surgery went well and you are on the road to recovery.

Those are some pretty gnarly x-rays!

“As soon as there is life there is danger”. You will be back sooner than you think.

you’ll be back, better and stronger on your skates in no time 🙂
Glad the surgery was a success!