Posted on October 21, 2009 by stefan klopp under Family, Photography

Wild mushroom picking, specifically the pine mushroom (Matsutake) is something of an event back in the Kootenays. Since pine mushrooms are such a lucrative crop, you will find many different people out picking. Whether it is someone with a job just out to get a bit of extra spending money, or a student trying to save up for his first car, or even a retiree, you are likely to find them out in the bush come September. For as long as I can remember my mom has been one of the most religious pickers in the area. So this Thanksgiving at the tail end of the pine mushroom season, I went out in the bush with my mom for a short picking session. 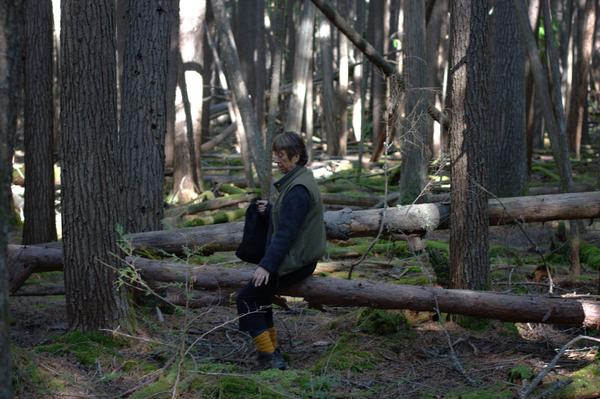 My mom has been picking in the same location for the last 20+ years. Actually I think most of the Fauquier community picks at this one location. So during the pine mushroom season, you are almost more likely to run into your neighbor in the bush, than you are on the streets of Fauquier!

So what makes pine mushrooms so special? Well they are a bit a delicacy in Japan, and are sold at extremely high prices. They are also a mushroom that is near impossible to farm. Pine mushrooms form a symbiotic relationship with the trees in the forest through a network of mycelia in the forest floor. So it is very important when picking that when you pick the mushroom you take care not to damage the ground of the mycelia when you dig out the mushroom. Pine mushrooms are also a difficult mushroom to find. Largely because they often grow below the forest floor. Often times you might only seem a glimmer of white, or even just a bump. Really good pickers like my mother, almost have a sixth sense when it comes to picking. 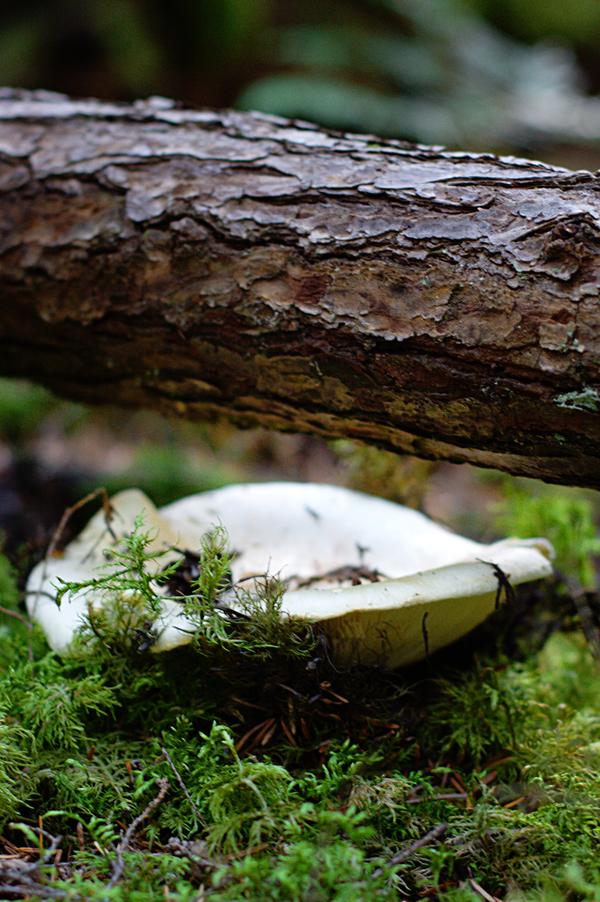 It is important when picking pine mushrooms to know what they look like. There are many different mushrooms in the forest, many of which that are highly poisonous. Several of these mushrooms tend to resemble the pine mushroom to the untrained eye. So how do you tell a pine mushroom? Well a young pine mushroom, called a button, will be fully contained without a detached “hat”. Somewhat resembling a lightbulb. 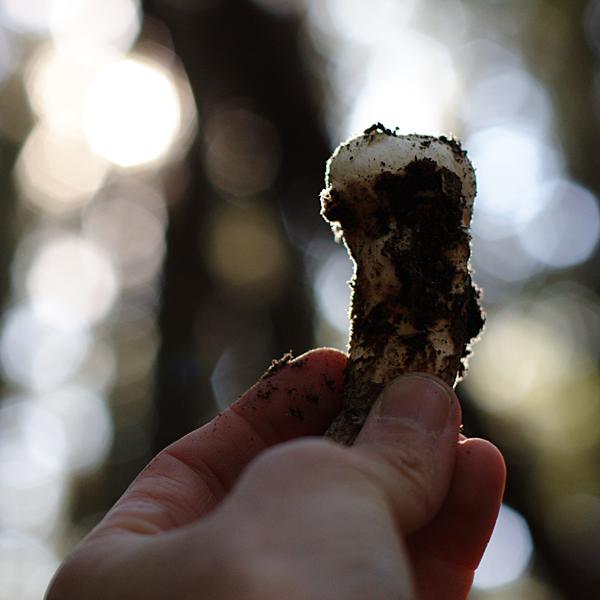 Pine mushrooms are creamy white in color, and generally found barely above the surface of the forest floor. As a pine mushroom grows older the outside of the hat begins to detach from the mushroom stem, and eventually when fully matured the mushroom will look like a table top. 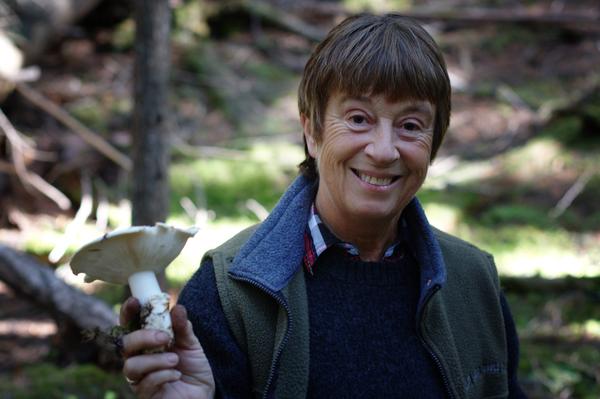 It is important when picking the mushroom to be very gentle. Pine mushrooms are very fragile, and especially if you wish to sell the mushrooms, you will want to make sure the mushroom stays in excellent condition. So to begin, start by slowly uncovering the dirt that is on top of the mushroom. 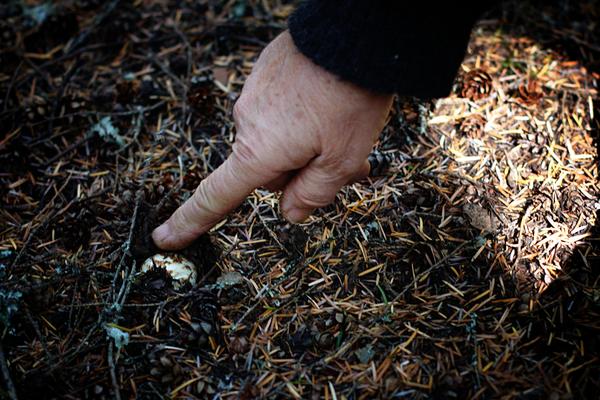 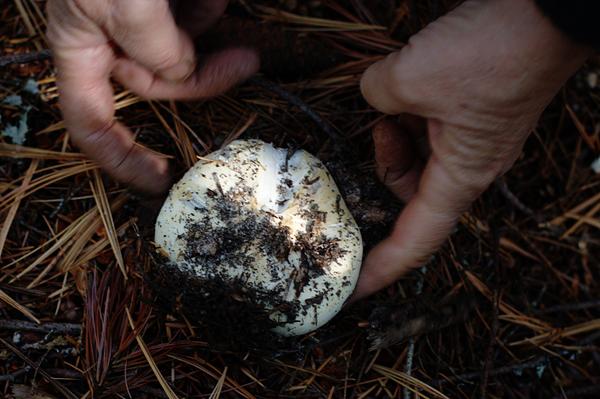 It was really nice to get out into the bush with my mom this Thanksgiving and take part in a bit of tradition. The excitement of the hunt, and getting to explore the forest makes mushroom picking a fun activity, and getting paid at the end of the day is icing on the cake.

Here are a few additional photos I took out in the forest of some other mushrooms. Be sure to leave these ones alone, as I am pretty sure none of them are edible. 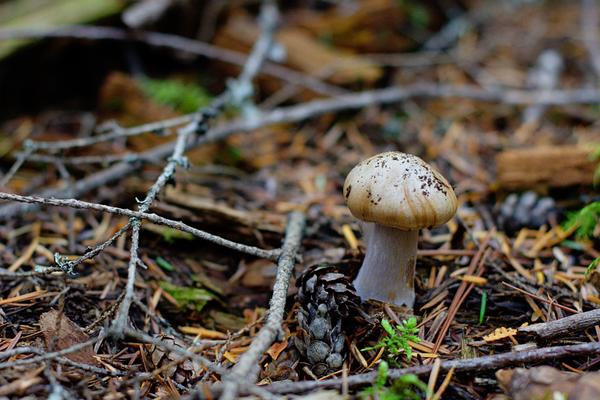 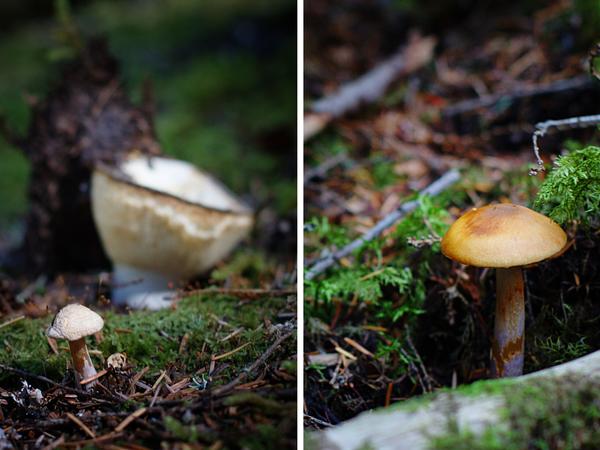 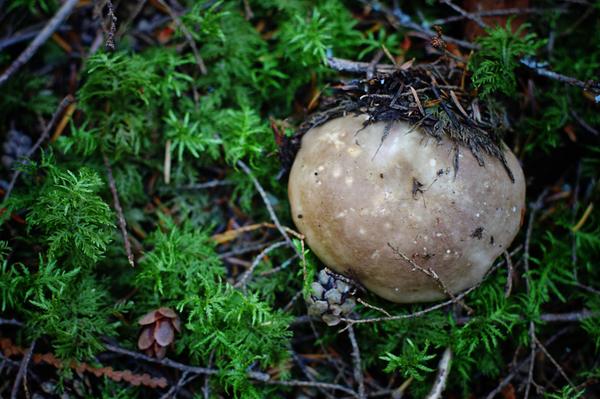 Picking Matsutake mushrooms in BC is a big money business for the Japanese. Keep Tak away from raiding Fauquier’s supply 🙂

ls there by any stretch of the imagination Pine Mushroom’s in the Port Alberni area, my wife and l have been out walking the dog in the bush and have seen all kinds of mushrooms. but not being mushroom smart we have passed them by. As l understand there are quite a few mushrooms in the forest here that are possiblely eatable and some not too tasty. Any info. would be appreciated. thanks for all or any trouble you go to

As far as I know they grow on the Island as well. The season starts a little later as far as I know. So you would be looking at October to November. Basically once you start to get consistent days of frost you will start to see the end of the season. A good way to tell if you have pines near you is if you notice any signs on the side of the road advertising they are buying mushrooms. If there are buyers nearby, there will be mushrooms near.

[…] made it home to visit my parents in the Kootenays for Thanksgiving. I spent some time with my mom pine mushroom picking. The rest of my time was spent in the kitchen helping her out baking pies and other nice […]

I want to visit the Kootenays so bad!

James, if you are in an area where pine mushrooms grow you will generally find local buyers nearby. Just ask around and you should be able to find some local buyers.

Not film related, but perhaps one day, I’ll make a movie about it « Film Music by Shayne Kasai
September 22nd, 2010

[…] mushroom. Usually grows near pine trees, and it smells like one too (a very distinctive smell). […]

Very beautiful pictures and lovely writing. I enjoyed reading your posf very much.

Loved your story and was wondering if there are some in Richmond or Pitt meadows or maple ridge or portcoquitlam.

Hi Roxanne. I don’t think you would find any in Richmond. Perhaps Pitt Meadows and Maple Ridge up in the forests, but I am not entirely sure. I have heard of people picking in Chiliwack as well as in Squamish.

Hello to the klopp family. Nice to see you , Gertrude, in the forest I am looking for mushrooms on Vancouver island.